Vimelco: Waste to landfill reduced to a third

It takes more than good will and slight tweaking to reduce the amount of waste directed to landfill from 30,000 to 10,000 tonnes. Taking a step towards more environmentally friendly operations in 2013, Kymenlaakson Jäte Oy made a large investment in preparation for the ban on disposal of organic waste at landfill sites, entering force in 2016. Ferroplan participated in this environmental measure by delivering 14 belt conveyors to Hyvinkää-based Vimelco Oy, which was responsible for the waste-treatment line solution to be used at the new waste treatment facility.

‘Waste is an unpredictable material, so we wanted a conveyor provider that could supply more than just hardware. We wanted a partner that would ensure at every stage of the project that the conveyors would also function in the final application,’ explains Vimelco’s product and project manager Lauri Rahikainen.

As this was Vimelco’s first full-scale plant delivery, the company wanted to pay special attention to preliminary investigations and the selection of collaboration partner. The client’s goal was to implement efficient treatment processes for mixed waste, enabling it to recover the maximum amount of waste for recycling and energy use. Because of this, every detail of the project had to be meticulously planned.

Ferroplan was selected as the conveyor supplier because it was known to be a reliable partner with strong expertise in the field. Installation work began in spring 2013, and the work progressed well, sometimes even ahead of schedule. The innovative waste treatment plant, which has aroused the interest of other waste companies, celebrated its opening in July.

Located in Keltakangas, the plant produces six categories of waste, five of which can be utilised either as raw material or in energy generation. The plant has the capacity to process 11 tonnes of waste an hour, and clearly Ferroplan’s conveyor systems are partly to thank for this.

The heavier 3D material passes via three conveyors and a magnetic separator to a wind sifter, at which the lighter organic material is separated from the heavy waste containing stones, concrete, metals, and other inorganic material. Both of these categories of waste are taken from the wind sifter via a trough-belt conveyor.

If the organic matter removed by the wind sifter is combustible, it can be transported backwards and combined with the 2D fraction separated out by the ballistic separator, through reversal of the conveyor’s rotation direction. The conveyor converges with the old shredding line, which takes the waste to an eddy current separator. This separator removes non-ferrous metals, primarily aluminium. The end result of the process is a combustible class of material that can be incinerated in, for example, a bubbling fluidised-bed boiler. 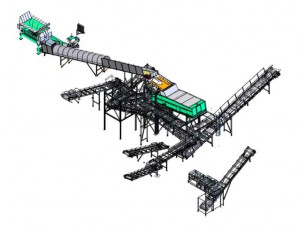 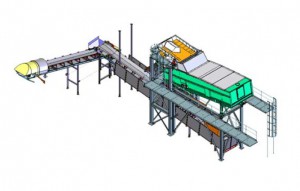 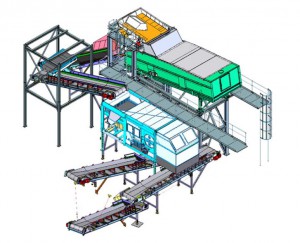 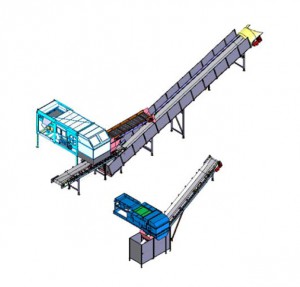